For the last nine years volunteers set up nearly 3,000 American flags at Tempe Park to honor those killed in the 9/11 attacks 11 years ago. Such a beautiful memorial to remember our brave heroes and victims of this unnecessary tragedy that took the lives of so many, I had tears in my eyes.

There is one flag for each the 2,977 victims, most of whom were civilians. Of those, more than 2,600 were in New York at the World Trade Center, both in the towers and on the ground. Attached to each flag are cards with the victim’s name,  a short biography and a ribbon.

The yellow ribbons represent the first responders; blue ribbons are for the flight crews on the two planes. If there are boots by a flag, it represents a member of the U.S. military and a teddy bear signifies a child.

On Tuesday, which is the 11th anniversary of the terror attacks, there will be a brief commemoration, including the reading of the names of the first responders who were killed. That will happen at 5:46 a.m., the same time that the first plane struck the World Trade Center. Later that morning and into the afternoon, the public is invited to join in the reading of all of the victims’ names. A candlelight vigil will take place at 7 p.m.

I can remember exactly where I was that day, when I heard about the first plane hitting the tower,as I am sure you all do. I did not personally know anyone who died that day, but I had friends and family that did. The victims that died that day will be in our memories forever! 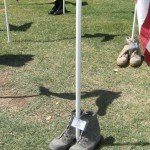 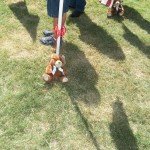 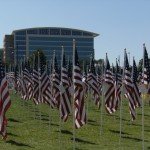